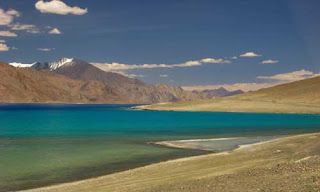 PANGONG LAKE
This route takes the visitor past picturesque villages of Shey and Thikse, and turns off the Indus valley by the side-valley of Chemrey and Sakti. The Ladakh range is crossed by the Chang-la (18,000 feet / 5,475 m) which despite its great elevation is one of the easier passes, remaining open for much of the year even in winter, apart from periods of actual snowfall. Tangse, just beyond the foot of the pass, has an ancient temple. But the main attraction of this circuit is the Pangong Lake, situated at 14,000 feet (4,267 m). A long narrow basin of inland drainage, hardly six to seven kilometer at its widest point and over 130km long, it is bisected by the international border between India and China. Spangmik, the farthest point to which foreigners are permitted, is only some seven km along the southern shore from the head of the lake, but it affords spectacular views of the mountains of the Changchenmo range to the north, their reflections shimmering in the ever-changing blues and greens of the lake's brackish waters. Above Spangmik are the glaciers and snowcapped peaks of the Pangong range. Spangmik and a scattering of other tiny villages along the lake's southern shore are the summer homes of a scanty population of Chang-pa, the nomadic herds people of Tibet and south-east Ladakh. The Pangong Chnag-pa cultivate sparse crops of barley and peas in summer. It is in winter that they unfold their tents (rebo) and take their flocks of sheep and pashmina goats out to the distant pastures.
Posted by Unknown at 11:57 PM No comments:

Tsomoriri or Lake Moriri (official name: Tsomoriri Wetland Conservation Reserve), in the Changthang (literal meaning, northern plains) area, is a High Altitude Lake (HAL) with an altitude of 4,595 m (15,080 ft) in Ladakh, India and is the largest of the High Altitude Lakes in the Trans-Himalayan biogeographic region, entirely within India. It is hemmed between Ladakh in the North and Tibet in the east and Zanskar in the west; the Changthang plateau is the geographical setting with snow peaks that provides the source of water for the Lake. Accessibility to the lake is limited to summer season only.[1] Tsokar means salty lake in local language and salt was extracted from thi 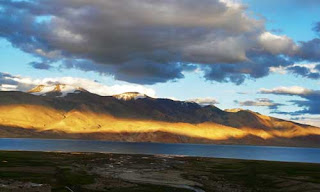 s lake in earlier times, till the end of 1959, for consumption by the local people.
Posted by Unknown at 11:47 PM 1 comment: